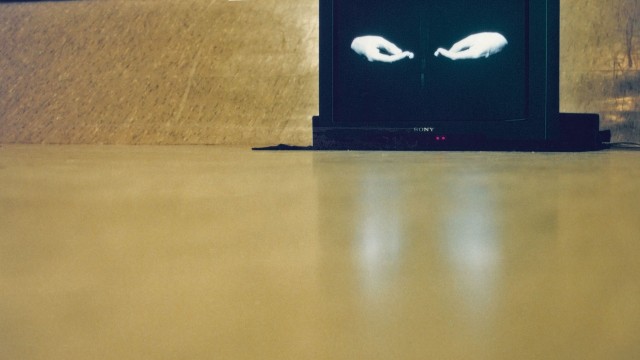 Texts
Next: Religion Under The Surface
Previous: Collectif 212

In Arabic, “Wahid” means “one.” It is also one of the ways to name God in Islam. This element is significant in the œuvre of Younes Rahmoun and evokes the idea of the odd number, as in Abyad Aswad for example, a series of drawings exhibited at the same time as the installation Ifriz. Each drawing represents two superimposed triangles that form a star. Only one of the drawings has a single triangle, which testifies to the artist’s interest in variation within repetition. For Younes Rahmoun, this “odd number” responds to the idea according to which the world is composed of two opposite poles (positive and negative, masculine and feminine…) which are bound by a third element that could be considered as pure energy, in a way like God. The artist declares:

In my early work, I worked a lot with series. But, in these series, there was always an element that distinguished itself from the others, by its form, its color, or its position. One day, someone asked me what I was looking for with this different element. I replied that I didn’t know, to which the person responded by suggesting that I was perhaps looking for myself. After that, I stopped including different elements in my series because I think of myself as being composed by atoms, just like all of the other things in the universe.

Thus, this search for the “odd number” progressively drifted towards a quest for universal forms, something to which the performance Wahid testifies. Wahid took place during the opening of the exhibition h+m=10 at the Warande Cultural Center in Turnhout (Belgium). During this performance, only the artist’s hands stuck out from the black djellaba that he wore, his head and face both covered by its hood. Sitting cross-legged on a square of black fabric arranged on the ground towards Mecca, Younes Rahmoun chanted the word “wahid” ninety-nine times during ninety-nine seconds in a medium voice. Only his fingers moved, chiming the ninety-nine words, one each second.

This performance led to a video, at once artwork and trace at the heart of the exhibition. The installation included a screen facing Mecca that showed the artist’s two hands in full-scale, lit and placed on the djellaba’s black fabric in such a way that the viewer could distinctly see the hands count the ninety-nine words “wahid.” The artist’s lotus-style position, like that of the Buddhists, symbolizes an opening toward other cultures and world religions. Younes Rahmoun declares:

I believe that, like everyone else, I am influenced by my encounters, by my travels… I try to take those values that seem positive to me from each culture that I approach and to use them in my work so that it is as open as possible, so that a Japanese person can understand it or take something from it that is as familiar to him as someone from the Ivory Coast might. The video Wahid shows a person sitting cross-legged. It is a position for meditation that we find in both Buddhism and Islam. But it is also this focus on the hands the recalls Christian icons and, moreover, the fact that the film is black and white mitigates the carnal element of the human body. Wahid condenses very different influences. It is a work that moves towards a certain universality.

This theme of universality is further explored by Younes Rahmoun in Subha. The work forms a luminous spiral on the ground, its diameter measuring approximately 3.5 meters. It is composed of ninety-nine illuminated light bulbs that are connected along an electric cable and enveloped in white shroud fabric. For Younes Rahmoun, the spiral moves from the exterior towards the interior, counter-clockwise. He explains:

At the level of the micro-cosmos, this movement is that of atoms, and at the level of the macro-cosmos, that of the planets. It is also in this sense that pilgrims move in Mecca, touring around the Kaaba while also coming closer to it. The rosary is a universal symbol. I am inspired by this object in order to create a certain form that communicates with other world religions.

Younes Rahmoun’s work is multiple. It condenses and mixes diverse influences that come from the artist’s universe, his origins, beliefs, and experiences, and constantly oscillate between the invention and appropriation of forms derived from a culture that is at once local and global. Due to an incontestable simplicity and harmony, these works evade the pitfall of a codified and formal interpretation and find their just interpretation: that of a certain universality, one that might also be called a “spiritual aesthetic.”