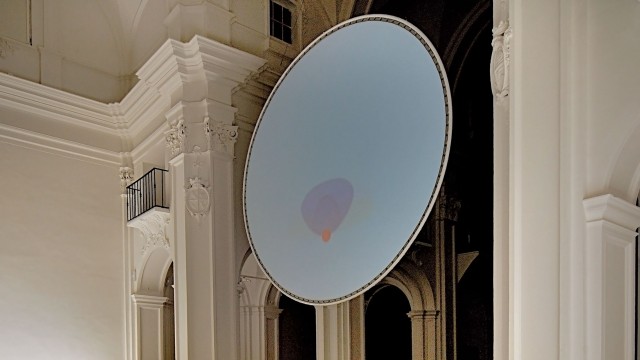 Habba means “seed” in Arabic. In 2008, this motif appears in the practice of Younes Rahmoun and marks the arrival of color in his work. Zahra, for example, is presented as an animated film during which seventy-seven flowers that the artist imagined appear in succession. Sometimes vertical, sometimes horizontal, each flower is made of numerous translucent and differently colored forms that superimpose on one another and create new and colored nuances each time. Younes Rahmoun describes:

Although each of the flowers is different, one of the elements of the animation is unchanging. It is the red dot located at the center of each flower and which, for me, represents the heart, the source of feelings and intentions. This heart beats and, like a seed, gives birth to a new flower each time. The video is accompanied by music inspired by the sounds of nature, like the rustling of insects at night. However, it also recalls the music and sounds that one hears in religious spaces and temples.

Not long after, Younes Rahmoun created a second colored animation entitled Habba, this time relating a seed’s voyage to the search for an ideal place for one to grow.

The seed’s journey at the heart of a white space could be seen as a metaphor of personal development. Indeed, I think that every human being possesses a space that belongs to him which is, however, simultaneously interacting with that of another. For me, this is the equilibrium between spiritual life and participatory life. This work was inspired by this process of personal development, by this search for harmony which is a long voyage of trial and error and maturing.

As these two works attest, Younes Rahmoun does not limit himself to using a single medium. Instead, the artist explores the possibilities that new technologies and multimedia offer him with curiosity, progressively opening up his practice to new perspectives. However, he remains faithful to those subjects to which he is partial, distinguished by a search for simplicity tied to a certain spirituality.

The animation, Badhra, represents a seed that turns around itself during a seven-minute cycle that recalls a dance with a very slow rhythm. Thin white roots emerge from this seed, moving towards the exterior, while delicate green roots move in the opposite direction, towards the seed’s center, represented here by a kind of deep green void. Younes Rahmoun declares:

For me, this center, empty and without roots, represents the origin, the nothing, the elusive. But life begins with this void, this nothing. It is here that divine secret, mystery, is located. The seed turns because it is alive, in connection with the cosmos, it is in its place. Additionally, a seed only grows in darkness. For me, it is a way to evoke the idea of retreat, for it is good to retreat from the world sometimes, in order to work on oneself. We might think that a person who retreats is an egotist, someone who does not participate. In reality, I think that in order to give, it is necessary to be able to, in other words, to be sufficiently developed. Thus, the seed develops progressively and gives its fruits.

My religion, for example, teaches me to take the middle path: I do not hope to consecrate all of my life to religion, like the Sufi sages who remove themselves from the world, but I also do not want to consecrate myself entirely to this material and ephemeral world. Participation is the time that I give to life and meditation, it is the time that I give to religion everyday. Participation and religion are not two separate elements, they form a whole, even though that might seem contradictory.