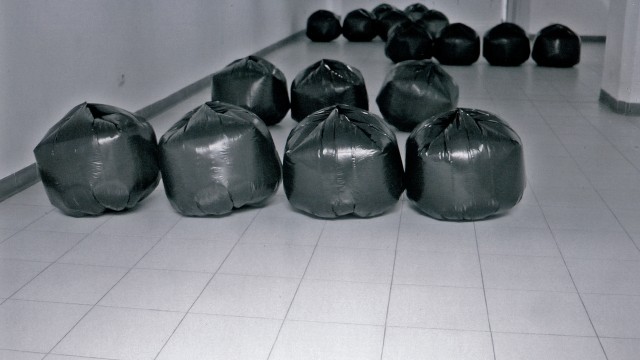 A Symbolism Of Numbers

The numbers 1, 3, 7, 33, and 99 reoccur in the work of Younes Rahmoun. They first appear in 2001 in the exhibition Tasbih in Marseille’s “Passage de l’art.” Tasbih presented four installations, Kemmoussa, Nafas, Oqda, and Melfoufa, each inspired by the artist’s daily life.

It was with this exhibition that giving significance to numbers became evident. Indeed, numbers, much like the position of objects in space, have a meaning for me. I cannot use them freely because I am an artist and I am also religious; there are beliefs, fundamental principles in my life. For example, for me, the number three represents the rhythm of the existence of things: existence, death, and rebirth. It also evokes the idea according to which the opposite elements that compose the universe are connected by a unifying element without which everything would decompose or lose its meaning. But this element connecting light and darkness, negative and positive, masculine and feminine, is the positive energy, the transcendent element that governs the universe. For me, it is God, but for others, it could have another name. The symbolism of the numbers that are at the center of my practice is inspired by Islamic culture because my work is nourished by my life, my thoughts, my vision of things on a day-to-day basis.

Hence, the arrangement and the number of elements that constitute the artwork Nafas are far from being fortuitous. The five rows comprised of seventeen bags inflated with the artist’s breath were inspired by a complex pattern that corresponds to the movements of a Muslim during his different daily prayers. The number two (represented by the two bags in the first row) corresponds to the two movement cycles of the sunrise prayer (standing, then bent forward to hip level, standing again, kneeling with the head on the ground, then kneeling with the torso upright, again kneeling with the head on the ground, and finally standing).

The second row (composed of four bags) corresponds to the noon prayer, when this cycle of movement is repeated four times. This continues for the other rows, each of which evoke a different prayer (afternoon, sunset, night) and whose precise moment is determined by the position of the sun in the sky.

If this symbolism of numbers is a significant element in Younes Rahmoun’s work, it is nevertheless considered less as a principle that codifies the reading of the artworks than as a source of personal inspiration, guiding the artist in his practice.