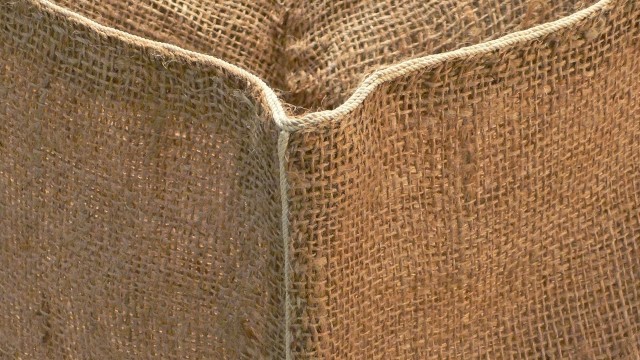 Simplicity As A Precept

It was at the very beginning of his practice that Younes Rahmoun decided to work principally with “poor” materials. If financial constraints explain this choice initially, the young Younes, still a student at the Tetouan Fine Arts Academy, quickly takes advantage of it. Because he could not afford expensive materials and all of the ideal artist’s arsenal, he worked with the materials brought to him by daily life. Freeing his artistic practice from an alienating economic dependency, Younes Rahmoun follows the precepts of Arte Povera without knowing it. The simpler the materials, the richer the concept and the more the creative process is worthy of interest.

The artist tirelessly explores the possibilities of jute, which was the subject of his first solo exhibition whose theme was the monochromatic and non-transparent containers and which was held in a traditional house in Tetouan’s medina (old city) in 1998. The raw aspect of the artworks contrasted with the colorful geometric motifs of the house’s mosaics, generating a dialogue between hundred-year-old Moroccan craft and contemporary art.

White fabric used to cover the deceased is cut, sewn and reworked according to the traditional gestures that Younes learned from his mother for a series of works about death.

Plastic bags that one finds in abundance in markets are collected and then compressed, like the artwork Mika. They produce a process that the artist names “aesthetic recycling.” He declares:

During my studies, I used many materials considered to be poor, like jute. I tried to create with what I had, with what I could have. But ultimately, money means nothing when faced with death or even with sickness. I tried to express this with the means that my profession offers me, to be aware of the choice of materials. I chose jute because I hoped to work with natural materials out of respect for the environment. I then went to using plastic as a way to criticize a situation, but also because aesthetically it pleased me. It was an evolution in my work, a way of being more open.

In the hands of Younes, banal and everyday objects take new forms and importance. At the same time, they testify to a certain cultural belonging, a Moroccan “identity.”

This search for modesty quickly becomes an attitude that is dear to the artist, for a perspective that is as much formal as conceptual. The cone, for example, extending toward the sky from its base on the ground, is the paradigm of the modest form. Very present in his practice, as in the work Maqbara, the cone evokes the simplicity of a tagine while also referring to the corolla that forms the outfits of whirling dervishes when they dance in a circular movement.

The conical form was inspired by the position of the lotus flower and by the whirling dervishes, whose costume makes a perfect cone when they turn, absorbed in a kind of danced meditation connected to the movement of the universe. Dervishes found a way to meditate that is singular to them: one hand towards the sky and the other towards the earth, in order to receive the energy coming from both poles, a way of being connected to the positive and to the negative in some form.

This marked attraction to natural elements, spirituality, and creative energies links Younes Rahmoun even more to the artists of Arte Povera, such as Mario Merz or Giuseppe Penone.