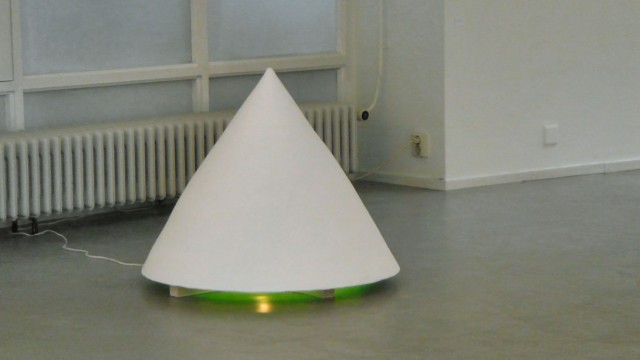 Religion Under The Surface

Texts
Next: Recycling
Previous: Wahid (one)

Younes Rahmoun’s oeuvre is entirely tinted with spirituality. The artist is Muslim and it is natural that his artistic practice reflects the beliefs that govern his life, notably in the choice of subjects and forms that the artists addresses and employs. The work, Darwish, for example, refers to Sufism, this religious practice that preaches the rejection of material life for the benefit of spiritual life. Younes Rahmoun chose to address this theme by creating a white clay cone varnished with matte white enamel and recalling the form of the dervishes’ costumes when they dance. From the interstice between the ground and the cone, which seems to levitate slightly, shines a green light that, for the artist, evokes illumination and faith. He specifies:

This cone, whose interior is lit with a green light, is for me similar to an envelope from which energy emanates. Practicing meditation implies a certain self-withdrawal, comparable to an imprisonment. However, this imprisonment does not happen in relationship to the world. Instead, it is a preparatory phase with the intention to participate in it.

The conical form of Darwish appears in numerous works by Younes Rahmoun, such as Khob Khob and Ifriz. Able to assimilate to the silhouette of someone sitting cross-legged and meditating, the conical form is, for the artist, a search for modesty. Indeed, its base is directly linked to the earth while its highest point soars towards the sky, towards what the artist considers as the highest abstraction.

At the same time, meditation, which Younes Rahmoun practices daily, is addressed in the work, Jidar, a performance for the Festival International d’Art Performance (International Festival for Performance Art) in Sète. During the 99 minutes of his action, Younes Rahmoun, dressed entirely in white, barefoot, and his palms empty and open to the sky, moved along a screen of fabric extremely slowly from right to left. This opaque screen, approximately 9 meters long and 3 meters wide, was oriented towards Mecca and illuminated with a green light by hidden projectors. Younes Rahmoun explains:

During this performance, I showed, as it were, my back to the world, I was there without being there: concentrated on what I was doing here and now. I faced this green light that I was trying to discover by looking only at it. However, I was not sitting to meditate, I was active. For me, the slow movement represents the rhythm of life and nature. Everything that happens naturally happens according to a very slow rhythm: the rising and setting of the sun, gestation, the growing of plants… I wanted this kind of wall of fabric with green light in order to evoke the idea of abstraction or the idea of God as a transcendental element that has neither color, nor form, nor sex. Green light is often associated with Islam, but in my work, it represents illumination for me, a kind of interior paradise. It is an intermediate color, neither hot nor cold, it possesses more nuances than any other color.

Younes Rahmoun’s work is punctuated by allusions to Islam, which are found in his use of numbers or in his invitations to make certain movements or gestures that take on a particular symbolism. Hojra, a kind of windowless building that proposes a calm and meditative space to all, is one example. In order to enter the installation, it is necessary to remove one’s shoes out of respect for the place as well as out of modesty, as in Japanese society. It is a gesture that prepares a certain kind of spirit, a way of feeling the ground and the surrounding space. It is also the first gesture that the worshiper does before entering the mosque.

Circulation within the space then begins to the right, the direction of reading and writing Arabic calligraphy as well as an allusion to the direction that pilgrims take when circling the Kaaba. The visitor finally arrives at a small central room that opens onto the sky, which for the artist is a metaphor for internal paradise. He explains:

To be an artist is a way of speaking about oneself, to include one’s own values in one’s work. So I do that a bit, as a way to express my gratitude to what the practice of meditation and religion have taught me. It is a way to share the beliefs that are dear to me. However, spirituality is far from being my only source of inspiration. I am also very interested in the facts of life, in events that affect the lives of everyone. With my works, I speak about both the interior and the exterior. However, I think that everything only forms a singularity. The interior and the exterior, the empty and the full, all of this is in reality the same thing.