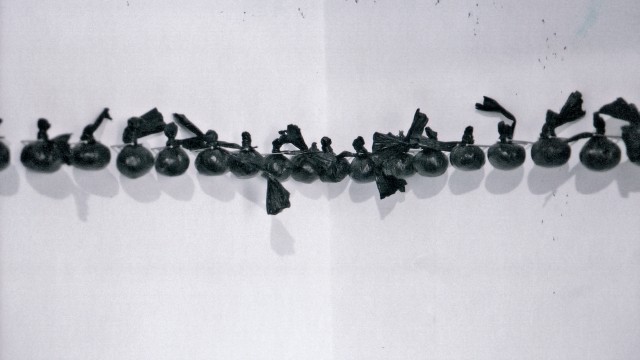 Texts
Next: The Everyday As A Source Of Inspiration
Previous: Religion Under The Surface

Particularly concerned with pollution and the environment, Younes Rahmoun developed an artistic procedure that he calls “Aesthetic Recycling.” This “method,” which consists of reusing non-biodegradable litter by giving it an aesthetic existence was first used with the work, Kemmoussa. The work, Mika (a name commonly used in Morocco to designate plastic bags), also illustrates perfectly this process, which is both ecological and artistic.

Mika is an intervention that took place in a private basin that serves a water reservoir to water vegetable gardens. This basin, which belongs to Younes Rahmoun’s grandfather, is located in Beni Boufrah, a small village in Morocco’s Rif Mountains. The artist says:

Since my grandfather’s death, this basin is no longer kept up. It is thirsty and stays dry all year. This situation is emblematic of that of numerous Moroccan villages, left by those young people who migrate towards the European continent. My intervention thus consisted of filling the basin’s interior with black plastic bags filled with air, arranged in a well-ordered fashion, lined up on the bottom. Barely an hour after placing them there, I deflated the bags and I kept them. Then, a bit later, I used these bags to make a sphere with a diameter of about 23 cm that I called Mika. This work possesses a certain critical dimension. It speaks about rural society in Morocco, about pollution and drought. Today, the people who live in the country no longer cultivate very much because they consider it a waste of time and energy. Instead, the wait for the money of those who left for the cities or Europe in order to buy what they need in the market. I thus chose to work with plastic bags because they are, in my opinion, the perfect emblems of consumer society. I filled my grandfather’s basin which this symbolic object that provoked its dryness. At the same time, it is a way to approach the theme of pollution, which is a major problem in Morocco because, due to ignorance, Moroccans throw away their plastic bags in the landscape. This attitude testifies to an evolution of the nature of consumer goods, which has taken place much more quickly than the evolution of mindsets. Before, bags were made of paper, people threw them away but this was not an environmental problem because they decomposed quickly. Today, the population continues to throw away their wrappers but they are unfortunately made of plastic and stay in the landscape. There is no system to collect trash in the Moroccan countryside and hence it piles up where it is thrown away, just next to the houses. I decided to align and to carefully organize the plastic bags because it is necessary for me; I find beauty in things that are well organized. It is something that I appreciate a lot in Islamic art: repetition, geometry, order. It is also a kind of challenge between the wind and me: will I succeed to line up all of the bags before the wind blows them away? This is why, once I succeeded, I immediately took photographs and then I went back inside the house with the plastic bags, which I use to make a sphere. The fact of having filled the basin with the bags and then rolling them into a ball was part of the same process: expansion and compression. Then I showed that with 450 plastic bags, it is possible to occupy a very large space, but if one pays attention, the place that they occupy can be considerably reduced. This intervention is both practical and aesthetic; it can be seen as a didactic work, as a way to explain to the rural Moroccan population that it is possible and easy to pay attention to the environment.