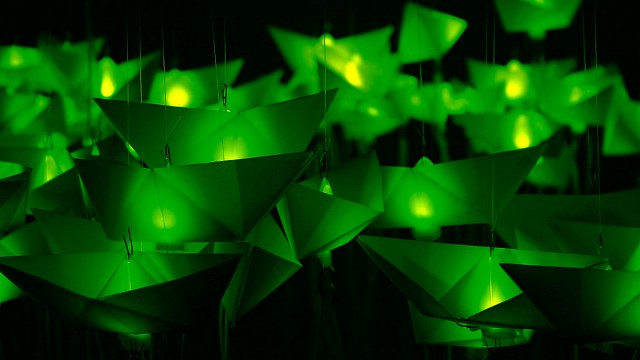 The use of lights and electric structures is a constant in Younes Rahmoun’s work. For the artist, light is a metaphor for the spiritual; it evokes the transcendental and the divine. For example, the installation Allah, located on a wall in the Spanish city Teulada, is comprised of thirty-three spherical light bulbs that evoke the word “Allah” when written in Kufic script, a stylized and geometric Arabic calligraphy. The light bulbs, which are endowed with a smooth and reflective surface that acts like a convex mirror, were specifically selected by the artist. They constitute a reoccurring element in numerous of his works. Younes Rahmoun explains:

I chose these light bulbs because they are made with two parts that correspond to two different functions: diffusing light and reflecting the surroundings. For me, light evokes the spiritual, the impalpable. On the other hand, the “mirror” element of the light bulb corresponds to the tangible, the concrete. The light bulb is itself an alliance between the spiritual and the material; it can be considered as a distillation of my work.

In many of his works, Younes Rahmoun deliberately leaves visible the cables that plug into electrical outlets. This is the case with the work Markib or Ilm/La-lim. Markib is an installation made with ninety-nine small boats on tracing paper that are suspended from the ceiling in a circle and which enclose each of the luminous green diodes. They connect to the ground where two other cables, stripped and placed in a circle, distribute electricity. The installation Ilm/La-Ilm – “Knowledge/Non-Knowledge” in Arabic – is presented as two electric cables placed on the ground with seventy-seven reflective light bulbs. Only one of the two cables is plugged into an outlet. It forms a spiral whose length is lit with light bulbs that emit a white light. The cable that is not plugged in is arranged on the floor, without a definite form. Younes Rahmoun explains:

In most of my work, the electric elements are visible in order to illustrate that we do not function alone. For me, to plug in a cable is the symbol of a connection to a greater force that guides our daily life. In the work, Markib, the boats represent human beings to me, each fulfilling its role, but all oriented towards a center, as if linked to a source of life. Indeed, I think that we do not decide at all what we do. For example, we do not choose to be born or to die.

With Ilm/La-Ilm, I wanted to work with the idea of positive energy. The plugged in cable forms a path that moves from the heart of the spiral to its origin: the electrical source. With the other cable, which is placed on the ground in a haphazard way, the light bulbs are not plugged in, they do not emit light and only reflect what is around them, which is to say what is material and concrete.