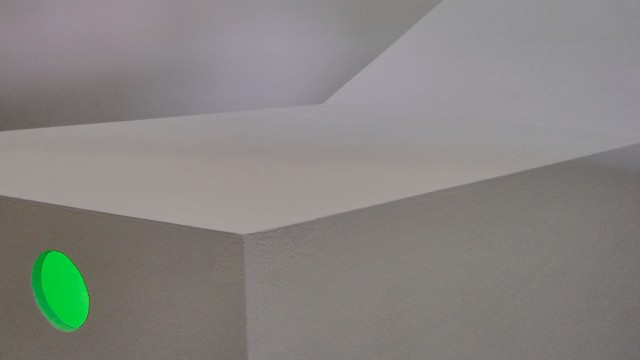 Al-ana/Huna was conceived in 2005 and came into being in 2006 in the form of the artwork, Ghorfa #1, Al-ana/Huna. This artwork lead to another, Hojra, presented the same year at the Canaries Biennale. Since then, this series, whose particularity is in its adaptation to new economic and social contexts, has developed into a global project with numerous productions in Morocco and elsewhere.

“Al-ana/Huna” signifies “here/now,” because the project in its entirety invites the viewer to meditate, to come into contact with his “here” and “now.” In it, the intimate universe of the artist confronts the exterior, thus concretizing an attitude that is as much human as it is artistic, one which is dear to the artist: that of dialogue and exchange.

The artworks in the “Al-ana/Huna” series are “ghorfa,” which are small rooms that were directly inspired by the artist’s room underneath the staircase in his family’s house in Tetouan. It was there that, for more than seven years, the artist kept his personal belongings, CDs, books, and what he needed for his work: a small table, a bookshelf, a lamp… No more than three or four square meters in which it is not even possible to stand up, but which was his private space: it is here that he was able to isolate himself on a regular basis in order to meditate and to create.

The first version of Ghorfa, Al-ana/Huna was finished in April 2006 at L’appartement 22 [1], an experimental space for producing art in Rabat. Titled Ghorfa #1, Al-ana/Huna, it was presented in the form of a plan that corresponded to that of the original ghorfa in Tetouan, drawn with green chalk on the floor of L’appartement 22. This plan was accompanied by a model, three drawings on A4 paper, and a 3D animation projected onto the wall for an event during which Younes Rahmoun explained his project to the public.

Then, in September 2006 for the Singapore Biennale, Younes Rahmoun built the first one-to-one scale ghorfa in a very simple spirit close to minimalism. The artist hoped to invite the public to enter the space and to remain there for some time in order to meditate and to concentrate on their “here and now.” It was a way for him to share his space of creation, a symbolic invitation to discover his universe, a way for him to open up to the other. But, for security reasons, the public was not allowed to enter the Singapore ghorfa. Younes Rahmoun decided then to materialize the “here” by illuminating the ghorfa’s interior with green light, which for him is the symbol of illumination, and the “now” by marking the ephemeral character of a moment with the tick-tock of a clock.

In 2007, Ghorfa #3, Al-ana/Huna was made in France. This time, it was an interactive version that responded to the state of concentration of the person who went inside. The nature of this ghorfa specifically responded to its context. Produced by and installed in Synesthésie, an organization and exhibition space that specializes in virtual and multimedia art in Saint-Denis [2], the ghorfa was cybernetic and constructed using materials produced with new technology. Made entirely of fabric, it was comprised of two layers, interior and exterior, that housed a sophisticated electronic system with motion sensors and ninety-nine luminous green diodes. The interior layer was made with opaque fabric that plunged the spectator into darkness when sitting in the inside. The external layer, meanwhile, was made with light white and translucent fabric that allowed light from the diodes to diffuse throughout the exhibition space. The visitor is invited to enter the ghorfa and to sit down on a small cushion placed on the ground. There is nothing else inside the ghorfa but the viewer, who sits in the darkness, here and now. But her state of concentration, her progressive calmness, manifests in the illumination of the ninety-nine green diodes that are illuminate the ghorfa’s walls. The less the spectator moves, the more the light intensifies, thus materializing her state of tranquility for those spectators outside of the ghorfa.

That same year, Younes Rahmoun decided with independent curator Abdellah Karroum to build a fourth version of the ghorfa. Located in Beni Boufrah, the village of the artist’s grandparents, in the heart of the Rif Mountains, Ghorfa #4, Al-ana/Huna marks a kind of return to origins because it is here that Younes Rahmoun made his first artistic interventions. It is also a simple way to speak about his work and preoccupations with his family and with those for whom art is often limited to drawing and the representation of “reality.” Younes Rahmoun declares, “What is important in this project in the Rif is my history with the place, my childhood, my family, my origins. It is an occasion, a pretext, to speak about art with people, with those who I love and those with whom I don’t find the occasion to discuss what I do. They often ask me the question [of what I do] and I reply that I am a “rassam” (draftsman), that I draw. It is all that I can say. But this is an occasion to speak about other things with them, about what they think of Art, of poetry…”

In order to make this ghorfa, Younes Rahmoun carefully respected the local modes of production. After visiting several plots of land, he chose a field of almond trees that measures approximately 999 m and borders a river, neither too close nor too far from the village. Then it was time to build. The stones used for the walls come from the neighboring river; they are particularly well adapted to the region’s hot climate, unlike brick which, despite its limitations, is unfortunately used frequently in Morocco. The walls were covered entirely with a mix of soil and straw called pisé, while the roof was constructed using tree branches with a relatively thick diameter. These were then covered with a layer of clay and concrete in order to guarantee the roof’s water tightness. The entire construction is reinforced with concrete, which requires little maintenance. Finally, the wooden door has a lock, which permits someone who wishes to stay there for a while to protect her personal belongings. In choosing to link modern and traditional materials, the artist seeks to show that it is possible to build in a way that is both solid and durable while also continuing to use stone and pisé, which are well adapted to the region’s climate and environmental conditions.

In order to visit the ghorfa, it is possible to follow the path proposed by the artist – reaching this space is an integral part of the artwork. First, the path takes the visitor up behind the ghorfa, moving counter-clockwise. Then she returns along the riverbed. For Younes Rahmoun, the path is symbolic; it is similar to a pilgrimage and the difficulty of accessing it refers to meditation, which necessitates both effort and perseverance.

Before beginning construction on the Beni Boufrah ghorfa, Younes Rahmoun assembled the advice of the village inhabitants and responded to their questions. It was during this exchange that the mutual help and listening began. The villagers provided the water, straw, soil, and donkeys to transport the materials and tools. The artist scrupulously tracked the traditional know-how of a master mason from the village, who worked with the help of assistants.

This project also fueled the curiosity of the village’s residents who were conscious that, while comparable to a Shepard’s cabin, this building was not at all ordinary. For, although built with the region’s materials, the ghorfa’s two roof levels and its reduced size are hard to justify. During its construction, numerous people from the village visited it in order to see up-close this “strange hut” and to ask the artist questions or, when he was gone, to interrogate members of his family of those who had closely followed the project. For Younes Rahmoun, “this project is a pretext to discuss with people, but also to work together, to help each other. Somewhere, the Rif ghorfa was built by the people of Beni Boufrah.”

In February 2008, during a day organized by the village youth organization, village children were also able to participate in the project. After explaining his work to them, the artist invited the children to plant a palm tree, an olive tree, and a fig tree, three trees that are very present in the Moroccan countryside and which, because of their place in the Qur’an, have a particular importance for the artist. This day was an opportunity to discuss art, but also social subjects such as pollution. Since then, the artist returns regularly to Beni Boufrah in order to repeat these kinds of discussions. Hence, if the ghorfa invites the viewer to commune with herself and to meditate, it also creates moments of sociability and significant reflection at the heart of a society marked by the disappearance of traditional practices that respect the environment.

Since 2007, Younes Rahmoun has worked on a new version of the project in the Netherlands with the curator Eline Van Der Vlist. This artwork, like that in the Rif, is produced as part of the project, Multipistes [3], a cooperative program that includes artistic projects, localized or not, conceived vis-à-vis a place and a context. Ghorfa #5, Al-ana/Huna was presented to the public in January 2009.

For this ghorfa, the artist was inspired by scientific forecasts about global warming which predict that the Netherlands, because of its very low altitude (a quarter of the country is below sea level) will be the first country to be totally invaded by water that will rise six meters. Younes Rahmoun wanted to evoke this theory by constructing a ghorfa elevated six meters above sea level like an observatory, a meditation space sheltered from natural catastrophes, or even a monument recalling the coming risks. However, for security reasons related to public accessibility, this project was not possible. The artist modified it and the ghorfa became itinerant. With two wheels, it was able to move like a trailer and flee the rising water. A symbol of the 1970s, the trailer is a reference to overconsumption. The ghorfa, on the on hand, can be pulled by a bicycle, a non-polluting form of transportation that is particularly common in the Netherlands.

Finally, the idea of a mobile ghorfa refers to immigration and in particular to that of Moroccans who moved to Europe while planning to return home one day. Each summer, when they return to Morocco, their cars sagging with luggage and with their savings in their pockets, they are certain that they will return to stay permanently in the house they built or purchased. But, at the end of vacation, material constraints catch up with them: to replenish the savings, guarantee their children’s education, return to daily reality, where the trailer keeps alive the dream of the next trip. For Younes Rahmoun, “the itinerant ghorfa symbolizes this illusion of freedom, the illusion of having a choice between two ways of living, the illusion that we can return home whenever we want.”

The ghorfa project does not stop evolving and adapting to new contexts. Its possibilities are infinite but the choices Younes Rahmoun makes touch on rich themes and places for learning, where the visitor is led to see, to hear, to question, and to open up. In this way, the ghorfa is a didactic project and the work of the artist is as much about creating plastic forms as it is about the unique moments that emerge, in which the spectator’s intimate experience with the work echoes that of the artist in his small room in his family home in Tetouan.