“On a four meter long shelf is a geometric frieze made with conical, black ceramics. This conical form was inspired by a variety of Moroccan objects like the tagine dish, teapot, breadbasket, babouche, etc. The form repeats itself along the shelf with an autonomous rhythm while drawing a black frieze through the white space of the gallery.
After three exhibited versions of Ifriz as part of the exhibition, L’Objet Désorienté au Maroc (The Dis-Oriented Object in Morocco), first at the Musée des arts décoratifs de Paris, then La Villa des Arts in Casablanca and finally at the Ateliers d’artistes in Marseille, I wanted to remove the work from its exhibition context so that it would become autonomous, which is why I changed its title from Frise to Ifriz, which means frieze in Arabic. I wanted the conical form to be able to evoke that which the spectator wants to see in it and not only Moroccan tagines. My intention was to open up the interpretation of the work.” 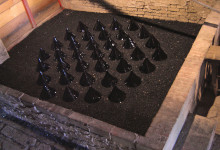 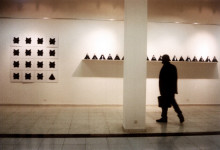