Hajibat are a series of in situ works, which was produced entirely with jute, emerged from the artist’s desire to apply the constraint of working in monochrome, which at the time occupied a crucial place in his pictorial research, to an installation practice. An exploration of the possibilities offered by a single material, this research comprises a kind of self-imposed challenge for the artist, a way of going as far as possible in the creation and range of forms.

The artist’s inspiration for these forms came from the very particular way in which Moroccans wrap, enrobe, and dissimulate. The forms come from the artist’s observation of everyday practices and from a marked interest in non-transparent contents. Canvas is presented here in the form of bags, which the artist buys and then opens and modifies, recalling the traditional gestures that he learned from his mother: cut, shape, sew… Thus modified, the bags adopt another existence, one more aesthetic than utilitarian. Modification and repetition guarantee a change in the status of these everyday objects that have become artistic. Once reproduced in multiples, the forms become quite organized (vertically or horizontally, suspended or on a wall) and are then named by the artist who gives them the prefix M, signifying a change in grammatical function that turns a noun into an adjective and allowing for the artist to emphasize the passage from an everyday object status to that of an artistic object.

In 1998, Younes Rahmoun adapted all of the artworks in the canvas series in order to exhibit them in the heart of a traditional house in Tetouan’s medina. The raw aspect of these works, which are close to Arte Povera, contrasted with the sought-after and colorful geometrical motifs of the house’s mosaics, inciting a dialogue between century-old Moroccan craft and contemporary art.

Location: House in the Medina of Tetouan, Morocco 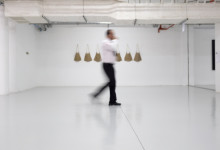 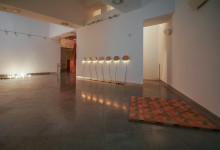 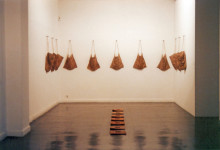