For this ghorfa, the artist was inspired by scientific forecasts about global warming which predict that the Netherlands, because of its very low altitude (a quarter of the country is below sea level) will be the first country to be totally invaded by water that will rise six meters. Younes Rahmoun wanted to evoke this theory by constructing a ghorfa elevated six meters above sea level like an observatory, a meditation space sheltered from natural catastrophes, or even a monument recalling the coming risks. However, for security reasons related to public accessibility, this project was not possible. The artist modified it and the ghorfa became itinerant. With two wheels, it was able to move like a trailer and flee the rising water. A symbol of the 1970s, the trailer is a reference to overconsumption. The ghorfa, on the on hand, can be pulled by a bicycle, a non-polluting form of transportation that is particularly common in the Netherlands.

Finally, the idea of a mobile ghorfa refers to immigration and in particular to that of Moroccans who moved to Europe while planning to return home one day. Each summer, when they return to Morocco, their cars sagging with luggage and with their savings in their pockets, they are certain that they will return to stay permanently in the house they built or purchased. But, at the end of vacation, material constraints catch up with them: to replenish the savings, guarantee their children’s education, return to daily reality, where the trailer keeps alive the dream of the next trip. For Younes Rahmoun, “the itinerant ghorfa symbolizes this illusion of freedom, the illusion of having a choice between two ways of living, the illusion that we can return home whenever we want.”

Location: Carpentry workshops for children in a park in Amsterdam, Netherlands 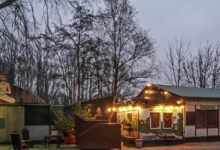