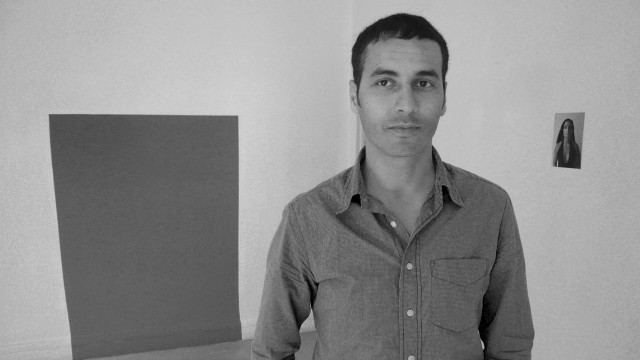 Younes Rahmoun and his “spiritual” art – Interview with Abdellah Karroum

From the Rif to the Canaries and back again, always within the vast territory of the Tamzgha (1). But Younes Rahmoun’s work seeks to transcend geographic spaces, through the penetration of these spaces in the form of the procession imposed in “visiting” his works. Younes is a mystical artist, and in this interview the subject is the relation of the artist to religious faith. The artist speaks as a practicing Muslim. The challenge: an open and free discussion.

Abdellah Karroum : The space of « Hoyra » is vast and open, whereas that of the « Ghofra » is cloistered and draws one within…Do you see “Hoyra” as a continuation of the “Ghorfa”?
Younes Rahmoun : I don’t know, but I believe that as you say, “Ghorfa” takes one inside oneself, while “Hoyra” draws one towards the sky (to a fragment of nature, and also beyond the seven skies).
“Hoyra” can mean the same thing as “Ghorfa,” it’s the room or chamber, the camera obscura, and we use “hojrat addars” to refer to the classroom. I had all three meanings in mind before deciding on the final title.

AK : Seven skies, as in the description of space in the Koran?
YR : I’d like to clarify something before answering that question. When I talk about heaven or God, I’m not thinking of a representation as in myth or pictorial traditions. I’m trying to speak of a visually inconceivable dimension. Beyond the seven skies, one transcends known space and time, and it is there that God and His Kingdom (Al-Malakut) reside.

AK : So your subject is that of religious space! Does the design of physical space in your “sculptures” always refer to religious concepts? Or does the relationship with religious faith come after the creation of the spaces?
YR : I think my ideas are increasingly informed by religion. When I develop an idea from my imagination, religion is always there…I don’t know if I’m expressing myself very well!
Really can’t say anymore where the form, the orientation, the proportions of the spaces I design or imagine come from. In my work there are symbolic aspects that are my own, as well as those of my Muslim culture, and also those tied to my being a citizen of the world.

AK : Do you mean that you proceed from your thoughts (your beliefs), and that the idea of serving your faith is always present? But what do you think of artists who work with minimal forms, and who produce luminous works without no religious basis? Artists like Sol Lewit or Donald Judd. They’re obviously in a different cultural context, but their works could well have the same effects as yours. Are you familiar with the work of these artists? I’m trying to understand how an audience that doesn’t share the artist’s references can “encounter” a work that is so spatially imposing.
YR : Of course, I know the work of these artists; they are among my masters.” Take, for example, certain works by Anish Kapoor or James Turrell, an Indian and an American. I find aspects of my work in most of the work of those two artists. I think that if you restrict yourself to the visual aspect of the work, there isn’t much to say about it. But if you address the concepts and the symbolism in each artist’s work, you will find both similarities and contradictions.

AK : Your relationship with the spiritual in various cultures is fairly present in your work. Even if faith is a personal matter, permit me to ask about your perspective on other religions, as a Muslim. What is this perspective? Of course, you’re not obligated to respond, but I’d like to know how you avoid being labeled as a “Muslim artist.”
Could you clarify your position on the engagement of religious faith in the social world? Or, more specifically, the line dividing faith as a spiritual practice, and religion as a social and political practice?
YR : I am a Muslim, and I am an artist. So I see no reason to reject the label of “Muslim artist.” It doesn’t bother me. Sometimes I’m also an “African artist,” a “Mediterranean artist,” or an “Arab artist”! Whether I reject it or not, I think it’s inevitable today. It’s not a problem for me if certain people insist on this kind of identification, even if I don’t accept it.
I’d like to talk about something before answering the other part of your question. I am a practicing Muslim. I am a devout Muslim, not just by virtue of my heritage. When I speak of religion, I am referring to the teachings that God transmitted through chosen human beings, whom we call the messenger prophets. Through these teachings, I find that religion helps me to lead a life in harmony and balance with other people. I don’t draw a bright line between faith and other practices. For me, religion is not separate from other domains of life. It is political, economic, social, and so on. In any case that’s how I understand religion. I do not distinguish “Younes the practicing Muslim” and “Younes the artist” — I am both. What I do is simply a reflection of myself. In my artistic work, I seek to discover myself and explain my own path of exploration. My work is the trace and the concrete result of that exploration.

AK : Do you mean that your works have a specific « sacred » way of being perceived ?
YR : I do believe that there is a “sacred” way of viewing my work that I can speak about, and which in fact I do speak about fairly often when speaking in public.
The prophet Mohammed says that “work is a prayer.” I take from this vision that each act is a prayer through labor. My work as an artist is all the moreso, because that is where I am most intensely concentrated. That is where I feel the fullest connection to the universe and to its Creator, “here and now.”
The way I see it, if someone wants to find a “use” for my work, it can help the “other” to experience a direct connection to the spiritual, here and now. A connection that may only last a moment, but that be a starting point. The other is the one who is in direct or indirect contact with my pieces.

AK : And can this audience come from anywhere?
YR : I really think so, because I live in a very small world, thanks to the media and the Internet. Even moreso now, with all the traveling I’m doing. That’s a classic response, isn’t it?

AK : What I meant by “international artist” is specifically international museums, Biennales, and exhibitions, new spaces being developed that the public sees as places to encounter and learn about works. By “international artist” I don’t mean a “robot artist,” or an artist without an identity. I’m referring more to an active presence, not a media persona.
YR : I see greater success as entailing greater responsibility. I take the vocation of the artist very seriously. Being present at international engagements can be awkward, because sometimes I’m forced to find forms that are more “legible” for everyone. But because form isn’t my primary focus, thinks get a bit more complicated. But in any case, I remain faithful to my intentions and to the path I have chosen.

(1) The Berber territories of North Africa, extending from the Canary Islands to Egypt, and from the Mediterranean to Niger. Tamazgha means “land of free men” in Berber.